A $2.6 billion gold deposit overlooks Wyoming's State Capital, within a stone's throw of the Interstate.

A few decades ago, I came across the Copper King mine in the Silver Crown district west of Cheyenne and 3 miles north of I-80. It seemed like this deposit was just waiting for the right conditions to again be mined.  Although, some claimed this property was mined out, simply because it was not being mined.

"Fleas can be taught nearly anything that a Congressman can." –Mark Twain

A mined-out mine is almost as rare as an honest politician. Properties like the Copper King have considerable potential and await the right group of people, CEO, and favorable economic conditions. It is said, "mines are not found, they are made"! In other words, the stars must align in the right positions to make a mine.

I was lucky enough to examine this mine and nearby properties in the early 1980s for the Wyoming Geological Survey, the University of Wyoming Engineering Department, and the University of Wyoming MMRRI (Mining and Mineral Resource Research Institute). In addition to this property, my field assistant and I mapped all of the accessible mines in this area and searched for other properties with potential. Anyway, we interpreted this as the root zone of a Proterozoic gold-copper porphyry deposit with nearby associated massive sulfide deposits. Years, later, I looked at the property again for a publication for the Wyoming Geological Survey about base metal resources in Wyoming, and then just a couple of years ago, came upon another opportunity to visit the property as a consultant for a group of gold mining companies.

After attracting companies to drill the property over the years when I was at the Geological Survey in Laramie, the Copper King was shown to have a resource equivalent of more than a million ounces of gold! Yes, and this property has just been sitting there, looking at the State Capital, and listening to the I-80 traffic to the south, and the Happy Jack road traffic to the north for all of these decades. Hard to believe, but just 19.5 miles east of the mine, is the State Capitol Building.

Imagine this, sitting next to Cheyenne and stone's throw from the Interstate and from the Happy Jack road, is a rich mineral deposit that has a minimum of $1.54 billion in gold, and $864 million in copper!!! How can that happen? If you know where to go, you can actually drive to this treasure, even in a Honda Fit: $2.4 billion in gold and copper sitting next to the state capital!

Recently, US Gold picked up the Copper King mine (Mining Quarterly Spring, 2019). The nifty thing about this property, is that it was originally mined for copper in the 19th and 20th centuries. I even met some of the people who had worked in the mine and mill some decades ago - they were extremely pleasant people and had many stories to tell. The ore was milled across the street from the mine and smelted next to the mill. But the gold resource in those days was not considered important, as it was too low-grade with gold prices at only about $20/ounce. But today's gold price ($1,308/ounce on April 10th, 2019) is 65 times higher than in the past. So, it appears, it may again be economic!

Based on drilling by several companies over the years including the now defunct US Bureau of Mines (the Bureau of Mines was eliminated by the Clinton Administration, even though it was one of the more respected research agencies in the world, simply because it assisted the mining industry), the ore body at Copper King is now known to have measured and indicated drilled resources of 966,000 ounces of gold and 236,000,000 pounds of copper, and an inferred resource of 184,000 ounces of gold and 62,000,000 pounds of copper.

After working on the property a couple of years ago, I was able to show the known ore body was cut off and down-dropped to the east along the Copper King fault. So, part of the ore body remains to be drilled that lies under an unknown thickness of gravel. There is undoubtedly more gold and copper (as well as silver) in this area. There may even be some zinc, as I found sphalerite (a zinc-sulfide) at a nearby property that has similar hydrothermal alteration mineral assemblages as the Copper King. And most porphyry gold-copper deposits include some silver and zinc. 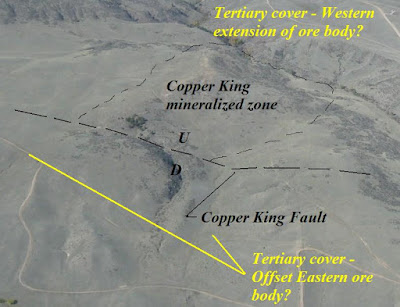 And, it may not end there. The likelihood of gold placers downstream from the property should be considered, but no one has ever bothered looking for gold in gravel. While consulting on this property, I examined core specimens that have visible gold (known as free gold); so it is very likely some gold ended up in the surrounding streams, especially when we have evidence that nearby diamond-bearing kimberlites have had as much as 2,000 to 3,000 feet of erosion since the Early Paleozoic. That could be a lot of gold transported down-stream over a billion+ years from the Copper King that is not all that far from the Early Paleozoic kimberlite pipe in the Colorado-Wyoming State Line district.

Being that the property sits within the Colorado-Wyoming diamond province, near a large group of cryptovolcanic structures (Twin Mountains structurally controlled depressions) I found while consulting for DiamonEx Ltd about 7 miles southwest of the Copper King, some streams in this region likely have placer diamonds. I also found similar cryptovolcanic depressions continuing all the way north to the Iron Mountain kimberlite district in the Laramie Mountains. Some UW students, working on my research grants, also recovered diamond indicator minerals in this part of the Laramie Mountains, as well as many rubies.

Although, practically no one has looked for diamonds in surrounding streams in the Colorado-Wyoming region, there must be millions of diamonds in stream gravels west of Copper King. Not so long ago, some very nice diamonds were recovered from stream gravels in Fish Creek, Rabbit Creek, and others in this region. Two of the placer diamonds weighed in at 5 carats! And as far as gold, I suspect that if anyone did any prospecting in gravels downstream from the property, they would find placer gold in some drainages.

So, get your gold pan and go have a look! 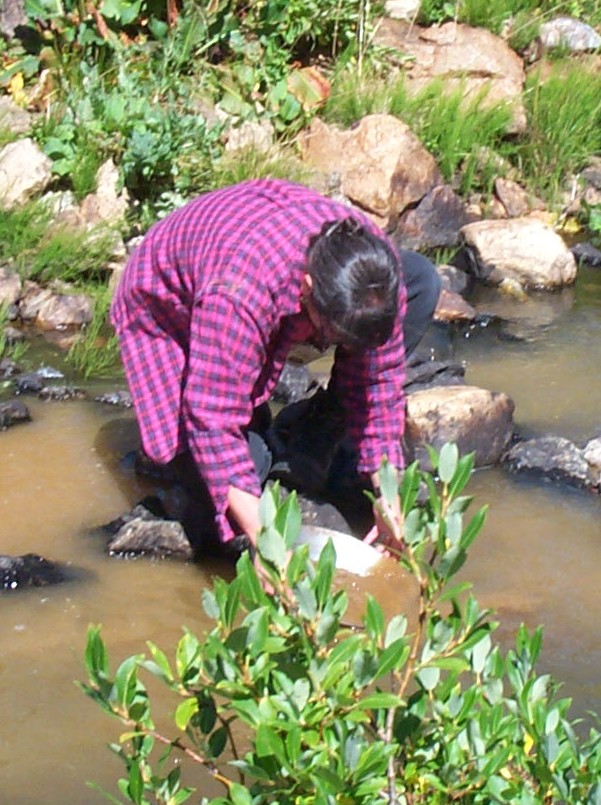